Ali Shoeib: Serves as a mouthpiece and as a Hezbollah collaborator in both intelligence and military aspects 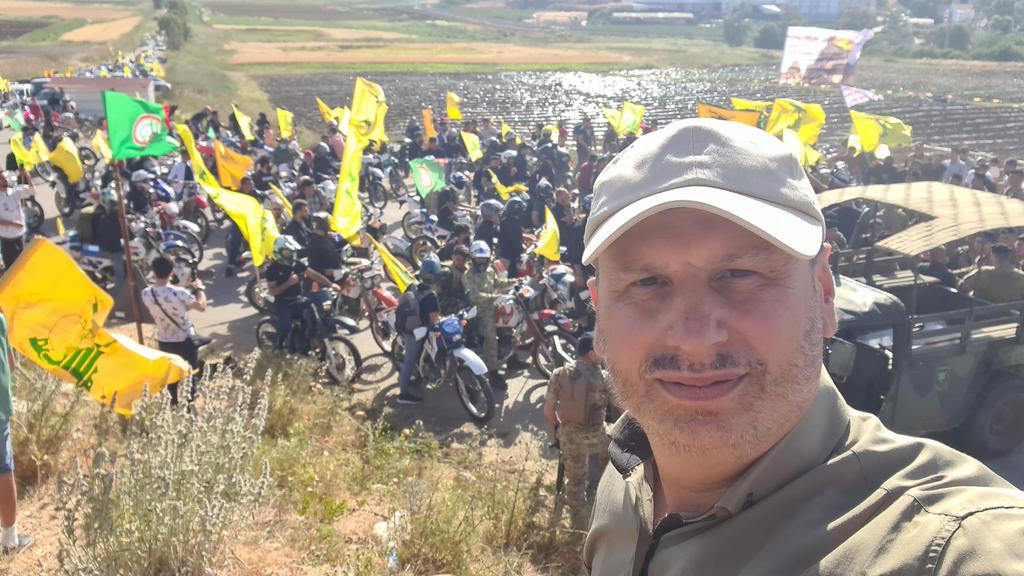 Ali Shoeib serves as Hezbollah’s “in-house correspondent” in southern Lebanon and has been an active participant in Hezbollah’s propaganda campaign for at least 21 years. Through his Twitter account, he reports about events and occurrences in south Lebanon, uploading videos, photos, and posts containing content that match Hezbollah’s policy and ideology.

By profession, Shoeib is the field and war correspondent for the “Al-Manar” news channel in south Lebanon, he also is employed as a broadcaster on “Al-Nour” radio. These two media outlets are affiliated with Hezbollah and are recognized as media outlets that function totally as Hezbollah mouthpieces.

Ali Shoeib was born on September 8, 1970, in the town of al-Sharakiya near Nabatiyeh, and is one of five brothers (Ahmad, Muhammad, Huda, Wafaa, and Ali), his parents are; Hassan Qassem Shoeib and Fatma ‘Awarha. Ali’s father is blind. The Shoeib family is the largest in the town, numbering at least 800 people.

Shoeib became a social networks star through his Twitter account and is known for his coverage of events and confrontations taking place on the Lebanese-Israeli border, reporting from the border, in proximity to IDF forces. Much of his extensive social media activity is part of Hezbollah’s propaganda and information warfare, devoting himself to mocking and challenging Israel and IDF soldiers.

In August 2010, while covering exchange of fire between the IDF and the Lebanese army in the Adisa area, Shoeib was injured and underwent surgery on his leg.

The apple doesn’t fall far from the tree, and Ali’s son, Hassan Shoeib, born October 12, 1992, works as a photographer for “Al-Manar”, photographing many of his father’s articles. Hassan, who lives in Nabatiya, also independently broadcasts coverage for “Al-Manar” and also “has a thing” for the border area with Israel. In November 2019, Hassan married the woman of his choice.

Fatma Shoeib, Ali’s relative and a reporter for Hezbollah’s newspaper “Al-Ahad”, is considered close to him, they even share Tweets. Fatma wrote an extensive article about Ali in his early days after the retreat of the IDF forces from southern Lebanon in May 2000.

Muhammad Afif, who is in charge of “Al-Manar” programs and broadcasts, stated that Ali Shoeib, despite being a reporter with a military profile, is untrained and has no connection to the combatants. Afif went on stating, that Shoeib was just a journalist who didn’t have any military missions. is that so?

In 2006, Mahmoud Shaaban Muhammad Khatib, a resident of Ghajar, was accused in an Israeli court of providing IDF strategic details and training programs to Ali Shoeib, which among other things, apparently linked him to a Hezbollah operative named “Abu Muhammad”, whom he communicated with by telephone. Also, in March 2019, an indictment was filed against Mahmoud Jabarin an Israeli citizen from Umm al-Fahm, who was accused of contacting Ali Shoeib in order to assist Hezbollah in its war against Israel.

Ali Shoeib is no ordinary journalist as claimed. He is an important mouthpiece in the service of Hezbollah’s propaganda and information warfare. In addition, Ali Shoeib is a Hezbollah intelligence and military operative involved in gathering visible intelligence along the Israeli border and an acting conduit for those who wish to collaborate with Hezbollah.