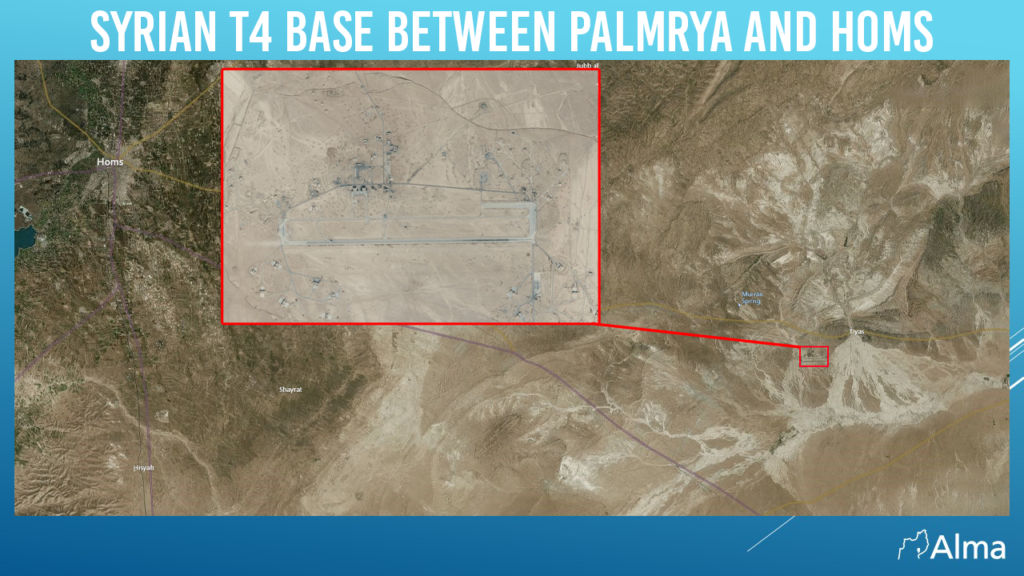 On October 8th, 2021, the T4 Syrian military airbase was once again attacked. The airbase is located adjacent to the highway connecting the cities Palmyra in the east and Homs in its west, approximately 60 kilometers west of Palmyra. The airbase is named after the area’s petrol station, which is part of the petrol pipeline connecting the cities Kirkuk in Iraq and Banias in Syria.

According to a Syria’s official news agency report, “… at 9:33 pm, the Israeli enemy launched an aerial attack from the Al-Tanf area (in eastern Syria, adjacent its border with Iraq), most of its missiles intercepted by Syria’s air defense system. The attack injured six Syrian soldiers and caused property damage”.

The T4 airbase is known as a place in which the radical Shiite Axis, led by Iran, conducts Some of its military activities. It is known as a center of the UAV array that the radical Shiite Axis uses (for both operation and storage). On February 10th, 2018, an Iranian attack UAV was launched from the T4 airbase towards Israel. The UAV was intercepted and downed by the IAF upon entering Israeli airspace south of the Sea of Galilee. The Iranian UAV’s launch trailer, which operated from within the T4 airbase, was also attacked and destroyed. In addition to the 2018 attack and the attack from two days ago, we are aware of another four attacks on the T4 airbase from 2018 to 2020, targeting weapons storage facilities and UAVs.

The Syrian air defense systems have indeed fired at the attacking fighter jets and the missiles fired from them, but the results of this firing are, to say the least, far from what is stated in the content of the announcement above. The Syrian soldiers that were injured were likely part of Syria’s Air Defense Array. The fighter jets policy was clear-cut: attack a pre-marked target (apparently, weapons in the airbase, most likely UAVs) as well as the Syrian’s Air Defense Array batteries, in the case that they (the batteries) will open fire on the attack force.

We know that weapons are brought to the T4 airbase for short-term and long-term storage to be used by the radical Shiite Axis led by Iran. We received indications throughout August 2021 that the Shiite Axis forces were transporting part of their equipment from Aleppo and Homs to the T4 airbase after the former areas were bombarded by aerial attacks on July 19th and 22nd, respectively.

Iran’s “UAV Army” is spread out all over the Middle East. Its proxies, each in its own area (Syria, Lebanon, Yemen, Iraq, and even the Gaza Strip), are highly competent in the UAVs’ operation for both attacking and Intelligence gathering. The UAV Army is yet another complex challenge for Israel. These days we are writing a special report on the subject.