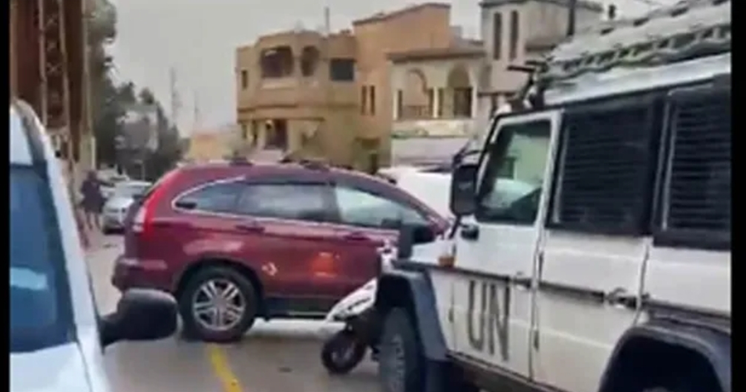 On the afternoon of December 22, three vehicles belonging to the eastern UNIFIL Battalion entered the town of Chaqra in southern Lebanon, located on the banks of Wadi Saluki, less than five miles west of the Israeli community Manara. Chaqra is a Shiite village controlled by Hezbollah. The UNIFIL vehicles driven by UNIFIL peacekeepers entered the town unaccompanied by the Lebanese Army.

According to various reports, the force stopped on a street in the southern part of the village and began filming houses using GPS equipment. Two young local residents (apparently Hezbollah supporters) approached the UNIFIL personnel and began questioning them. A confrontation between the young locals and the UNIFIL personnel began, up until the point that the UNIFIL peacekeepers drove on, hitting the two young men who were injured lightly. When the UNIFIL vehicles eventually reached the town’s market, a red jeep and a motor scooter blocked their advancement.

Local residents began to amass around the UNIFIL vehicles. They started throwing stones and cinderblocks at the windows and hoods of the UNIFIL vehicles, attempting to take the cameras and equipment from UNIFIL personnel forcibly. Local police prevented the incident from escalating until Lebanese army intelligence officials arrived, accompanying the UNIFIL force in a secure convoy out of the village.

The incident provoked strong reactions on Lebanese social networks sympathetic to Hezbollah. Even before this incident, Hezbollah supporters in Lebanon in general and throughout southern Lebanon, in particular, are very suspicious of the UNIFIL forces and their activities. Some of the comments “determined” that the above mentioned were Israeli soldiers in UNIFIL uniforms…

In response to the incident, Candice Ardell, Deputy Director of UNIFIL’s Media Office, commented that interfering with the U.N. forces carrying out its mission under Resolution 1701 was completely unacceptable. She called on all concerned parties to respect the freedom of movement of the U.N. forces, calling on Lebanese authorities to investigate this incident and bring the perpetrators responsible for the attack in Chaqra to justice.

The Lebanese Foreign Ministry expressed regret over the incident. It stated that the Lebanese Prime Minister, Mikati, and the Lebanese Foreign Minister are awaiting the conclusion of the investigation and that any attack on UNIFIL forces is especially unacceptable. They declared that UNIFIL still plays an important role in maintaining the stability in southern Lebanon and that Lebanon continues to adhere to all international resolutions, especially resolution 1701.

There is a clear correlation between the areas in which Hezbollah operates in south Lebanon and the areas in which UNIFIL forces are not allowed to move, despite their international mandate. Even if they are allowed to operate in these areas, they will be allowed to do so only after prior coordination and accompanied by Lebanese Army intelligence forces, which usually cooperate with Hezbollah.

The incident described above is further proof of the inefficiency of UNIFIL forces in southern Lebanon in enforcing resolution 1701.