The Natural Gas Transfer Project from Egypt to Lebanon – Middle Eastern Irony at its Best: 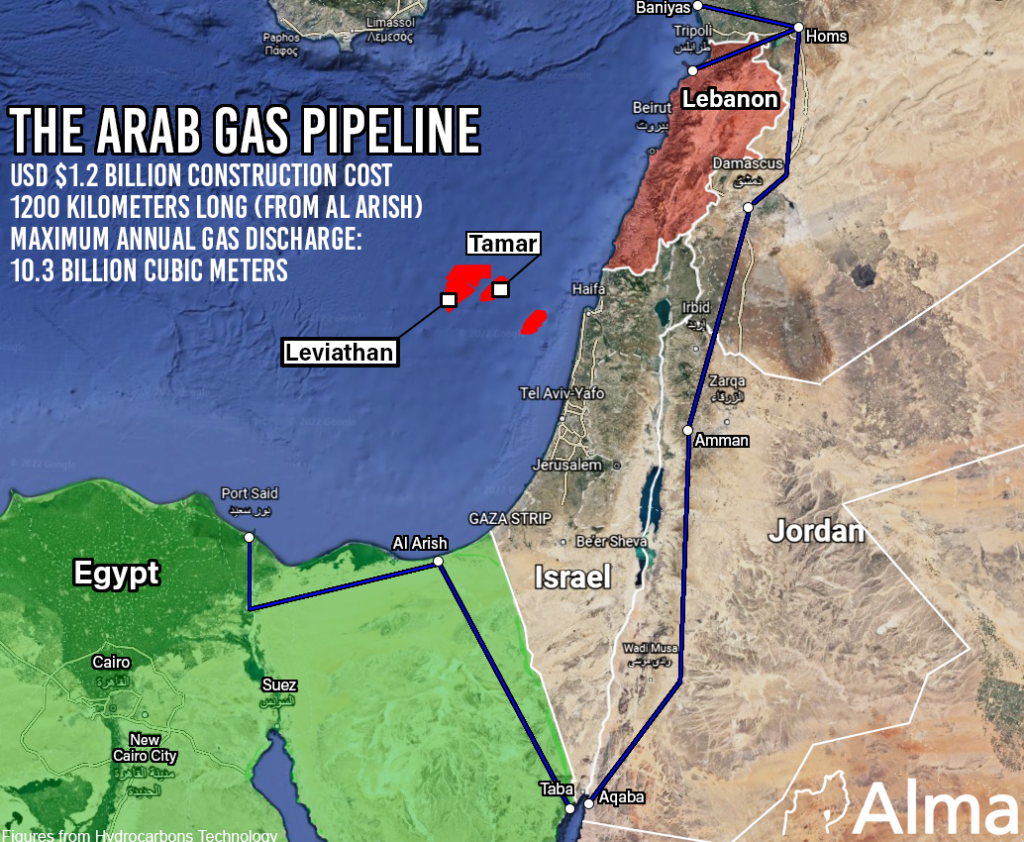 On January 14, the U.S. ambassador to Lebanon handed Lebanese Prime Minister Mikati an official U.S. Treasury Department document stating that the United States would not impose any sanctions following Lebanon’s gas and electricity transmission agreements with Syria, Jordan, and Egypt (Additional 650 megawatts of production on average for the Lebanese electricity sector).

Despite reports (mostly in Israeli media) that the gas is extracted from the Israeli gas reserves Tamar and Leviathan, the Lebanese Ministry of Energy denied this, noting that it had received assurances from Egypt that it was Egyptian gas and not Israeli gas. The U.S. State Department also issued a statement (January 16) declaring that the alleged reports that the U.S. brokered an energy deal between Israel and Lebanon were untrue.

According to Lebanese Energy Minister Fayyad (December 29), completing the project of transferring electricity from Jordan ( 200 megawatts on average) and gas from Egypt ( Will allow the production of 450 megawatts on average) through Syria will allocate 10 hours of electricity per household, every day, throughout Lebanon. Various statements of those concerned confirm that the infrastructure for the transfer of electricity and gas will be ready to operate by the end of the first quarter of 2022 at the latest.

Will the infrastructure really be ready as planned? Who will benefit from the project? Will the Egyptian and Jordanian energy supply to Lebanon curb Iran’s influence over Lebanon? Is the gas originating in Israel?

We do not know whether the infrastructure will actually be ready by the end of the first quarter of 2022. It seems that it is in the interest of all parties involved to carry out the project and expedite the restoration of the infrastructures. This is a project that everyone (ironically, also Hezbollah ) will benefit from. Egypt, Jordan (and Israel?) will benefit from the sale of gas and electricity. Syria benefits from the restoration of the infrastructures in its territory and will be paid for the use of these infrastructures. In addition, we understand that Syria will also be able to use some of the electricity and gas for its needs. The State of Lebanon will have doubled its capacity to generate electricity.

In our assessment, Hezbollah will know how to utilize the new situation to its advantage, and the project will not curb Iranian influence on Lebanon.

In our assessment, the likelihood that the radical Shiite axis headed by Iran will physically impair the project is low. Hezbollah would prefer, as much as possible, a fixed electricity supply (rather than the use of generators) both for its military interest (for its military infrastructures) and for its civilian interest (for the Shiite population and for its civilian infrastructures). We also estimate that Hezbollah will be able to influence the electricity supply time to Shiite areas at the expense of other areas in order to benefit its political and influential narratives.

Hezbollah’s media campaign to enhance its narrative appears to have already begun. In response to reports that it is Israeli gas, Hezbollah spokespersons began to publicly declare that “the resistance forced the Zionist and American enemy to deliver gas through Egypt, Jordan, and Syria … it is allowed through friendly countries… directly receiving gas is forbidden because normalization is prohibited…”.

In fact, there is an apparent admission and recognition by Hezbollah that the gas comes indirectly from Israel…

If Hezbollah does not manage to acquire the ability to influence the electricity supply throughout Lebanon (it does not seem likely to us), they will know how to adapt their narrative campaign accordingly. We do not know if the gas that will be supplied from Egypt to Lebanon through Jordan and Syria originates from Israel.

The fact is that both Egypt and Jordan buy Israeli gas for their needs and the infrastructure of the pipelines to which the Israeli gas flows will also be used to transport the gas to Lebanon.

If it is gas originating from Israel, ironically, the Shiites in Lebanon and Hezbollah, in particular, will enjoy it and use it to their advantage.

Everything is possible in the Middle East. It’s Middle Eastern irony at its best…