Hezbollah: The U.S. is like Iran (but with a small twist…) 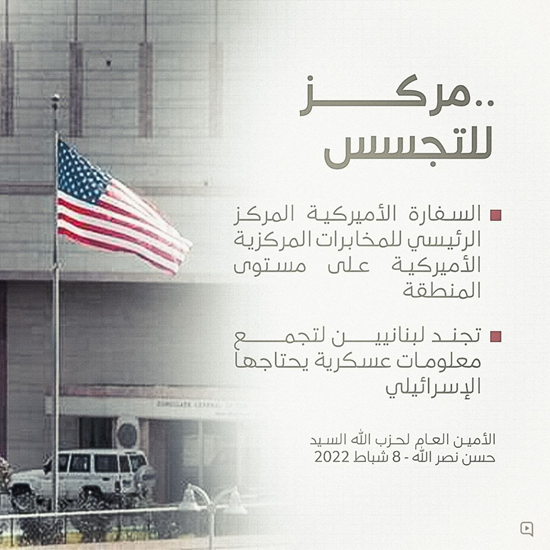 Hezbollah appears to have begun a new anti-American campaign with a new sarcastic message after Hezbollah received numerous condemnations from many Lebanese (not Shiites) who were fed up with the Iranization Hezbollah imposes on Lebanon in general and on Beirut in particular. The trend of renaming streets, statues, memorials and decorating the streets with Iranian symbols has recently greatly intensified. This trend has led many Christian ex-pats who came to visit their homeland on holidays to think that they landed in Tehran, not Beirut.

The purpose of the new campaign is to deliver a counter-propaganda message to these claims and to show that the United States is actually like Iran, but on the other side of the divide: just as Iran supports Hezbollah in Lebanon, the United States supports those who oppose Hezbollah in Lebanon, i.e., a foreign country deeply involved in all areas of life in the country, even those that are supposed to be completely sovereign.

Hezbollah leader Hassan Nasrallah, interviewed on Iran’s al-Alam news channel on February 8, described the U.S. Embassy in Lebanon, which is undergoing expansion and renovations, as a huge espionage center. We know that the embassy is being built with an investment of over $1 billion and will be the largest American embassy in the Middle East, even larger than the one in Iraq.

In an interview with al-Alam, Nasrallah accused the American Ambassador to Lebanon, Dorothy Shea, and the American embassy in general, of being overly involved in the Lebanese political arena, supporting prominent Hezbollah adversaries such as Samir Geagea and his party.

Ali Shoaib, al-Manar’s main correspondent in southern Lebanon and a Hezbollah mouthpiece, illuminated the message, explaining that this ad is not directed only at the Ambassador but towards the administration she represents. In fact, an administration is a line of defense of Israel within Lebanon. The U.S. servants inside Lebanon are too weak to admit it. He signs his article with the proverb, “The wolf does not eat the lamb unless the lamb (USA/Israel) goes to it!”… and shepherds have a duty to be careful, if not…

Another ad shows the American embassy and Ambassador as a multi-armed octopus whose tentacles touch all Lebanon’s walks of life. Economic, political, and the military:

Military influence (In the ad – LAF Chief of Staff and American Ambassador to Lebanon):

In conclusion, the central narrative of Hezbollah’s campaign is that anyone who complains about Hezbollah, declaring that they want a sovereign state, must deal with the destructive influence of the United States…