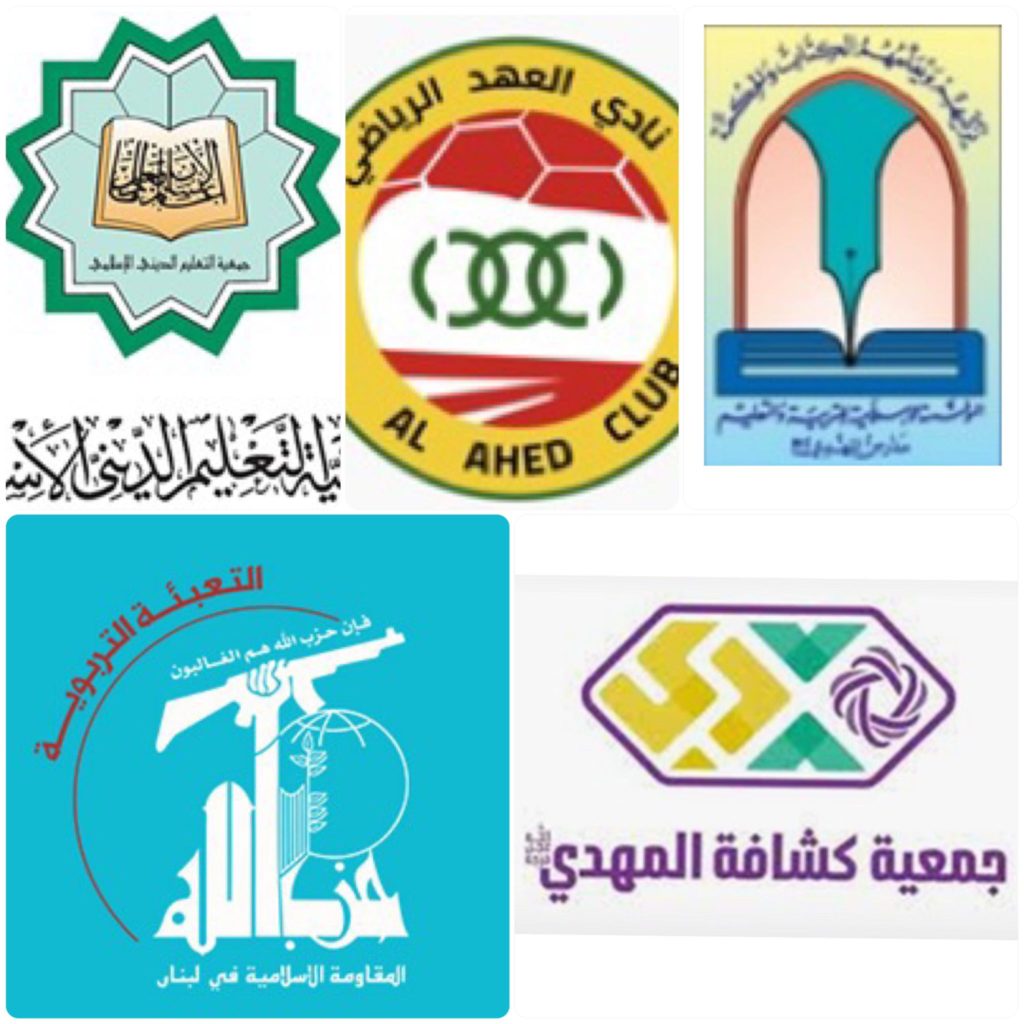 The Education Recruitment defines itself as “an organization that works to create an identity between knowledge, Jihad, education, and faith, in the service of resistance, the homeland, and the nation, and in preparation for the imam al-Mahdi State that will fill the country with honesty, justice, and happiness after it has been filled with oppression, deprivation, and suffering. The organization primarily appeals to Shiite students in Lebanese schools and universities in order to recruit them into Hezbollah activities upon completion of their studies.

The stated goal of the Education Recruitment is to “assist the resistance by feeding it with scientific skills, spreading the culture of resistance among students, spreading Islam and faith, and helping the needy with payments, discounts and the distribution of textbooks,” with the understanding that the target audience will be grateful to the organization for the assistance and, directly following this, will be mobilized for its activities upon graduation.

The Education Recruitment is headed by Haj Youssef Mer’i, the head of academic activities is Hossein Ismail, and the youth supervisor is Haj Nasser Ghazala. The following are the names and roles of other senior figures in the organization:

– The head of the Education Recruitment in the first southern region (south of the Litani River), Haider Mousasi (preceded by Haj Musa Abd Ali).

– The head of the Education Recruitment in the second southern region (north of the Litani River), Haj Safa Safa. The head of the universities in the area is Hamza Sharaf al-Din.

– The head of the Education Recruitment in the Beqaa is Haj Hussein al-Haj Hassan. In the central sector of this area, the education chief is Haj Ali Qassem al-Haj Hassan.

– The head of the Higher Education Organization is Dr. Abdullah Zi’our.

The types of activities that the Education Recruitment conducts are lectures, cultural and educational workshops, religious ceremonies, appreciation for outstanding Hezbollah students and Hezbollah supporters, grants for scholarships, organizing political recruitment meetings with politicians and journalists who support Hezbollah’s resistance policies, trips, organizing exhibitions and competitions on subjects of opinions and education, holding sports competitions in honor of national events, organizing courses to assist students who have difficulty studying and holding ceremonies in elementary schools in honor of girls coming of age and starting the wearing of the hijab.

Such events occur on Shiite festivals and holidays, Hezbollah’s commemorating days (e.g., Israel’s withdrawal from south Lebanon), Lebanese national holidays (such as Mother’s Day and Teacher’s Day), and on many occasions for no particular reason. A special concentration of activities can be found at the beginning and end of each school year.

These activities reflect key values that Hezbollah wishes to instill in its supporters and activists, especially, Jihad, Shahada (martyrdom), and Shia, as shown in the following segmentation:

The network was founded in 1993. There are at least 17 schools (from elementary to high school) deployed in the Shiite areas of Lebanon. It seems that its educational emphasis is on exact -sciences studies. However, the network’s educational content does not skip the religious aspects, which include studies in the context of Hezbollah’s “values.” The CEO of the network is Dr. Hassan Yusuf.

Hezbollah’s Scouts Network. Founded in 1985. There are 42,000 scouts in dozens of tribes throughout Lebanon. The network’s activities also expanded into Syria after Hezbollah’s involvement in the radical Shiite axis led by Iran. The scouts are from the age of 8 to high school. As part of the training, especially in their teens, the trainees receive religious lessons. After the age of 16-17, many trainees join the organization’s military activities directly. The indoctrination of militancy can be seen in the scouts around the military parades they often carry out in public and even through meetings with Hezbollah combatants. The Scout network is actually a recruitment platform for Hezbollah’s military units. The unit commanders locate prominent trainees, “mark” them, and recruit them for military activity.

The CEO of the Scout Network is Sheikh Nazih Fayad.

Since 2013, Hajj Jihad Atiya has headed the sports recruitment organization. Sports officials are subordinate to him in each area where Hezbollah is present and active. In an interview with Al-Manar TV (owned by Hezbollah) in January 2015, Attia explained the importance of the organization he heads and the importance Hezbollah gives to sports in general. First, Hezbollah perceives sports as a framework for the younger generation to be educated in its important values. Second, since the main activity of Hezbollah itself is military-jihadist, it is important to have a dedicated body for sports to attract the youth. In order to demonstrate the importance of sports to the general public, Sports Recruitment makes extensive use of a famous quote by Imam Ruhollah Khomeini; “I am not an athlete, but I love the athletes!”, and sometimes other quotations from senior clerics who focus on the importance of balancing physical and spiritual strength.

Hezbollah benefits and profits from investing in sports on several levels. First and foremost, it is an important tool for indoctrination, spreading messages, and assimilating values in accordance with Hezbollah’s desires. Second, the investment in certain types of sports (martial arts, running, rope rappelling, shooting) embeds an element of preparation for military activity. In addition, sports are a source of income.

In addition, sports are one of the methods Hezbollah uses to assimilate into the country in general (for example, by naming competitions after Lebanese army operations and holding activities in honor of Lebanese Independence Day in conjunction with Martyr’s Day) and Christian denominations in particular (for example, by holding sporting events dedicated to Christmas and New Year’s Day, almost every year).

Hezbollah’s use of sports events for indoctrination, dissemination of messages, and assimilation of its desired values among the public is expressed on two main levels: symbolic and physical.

On the symbolic level, it is expressed first and foremost in emphasizing the value of Shahada (martyrdom) in various aspects of sporting events: naming the event after the name of a particular martyr (shahid) or a group of martyrs (Shahid Haj Mahar cup, the town’s Shahid’s cup, etc.). Naming the Shahid Sports Team or The Martyrs Group (“Shahid Ali Nasser Group,” “Shahidi Neighborhood Ajjur,” etc.), and naming sports facilities and courses after martyrs as well (Al-Raduan course for football referees, Town’s Shahids, etc.) and honoring the families of martyrs at events.

In addition, the organization meticulously publishes details regarding the lives of various martyrs that link them to the field of sports, such as the publication of the fact that shaheed Muhammad al-Zin is a goalkeeper at The Bint Jbeil Sports Club, the publication of the fact that Shahid Qassem Shamha is a player in the Al-Ahed Football Club, and the distribution of a photocopy of the certificate of membership in the Al-Fajr Sports Club on behalf of the sports recruitment of Shahid Ali al-Ashiq.

On the physical level, indoctrination is expressed in many aspects. First, the very establishment of sports facilities near places of worship attracts the public to the sites of worship themselves. Second, some sporting events take place on sites of historical significance and importance to Hezbollah, such as the monument to former Secretary-General Sayyed Abbas al-Mousawi or the outposts of the Al-Taher ridge.

Hezbollah has created part of its sporting events to provide the public with an opportunity to meet with “real” military activists and not only hear and see their heroism stories on Facebook or via video clips on Al-Manar. Thus, for example, at the opening of a race held in al-Housh, a suburb of Tyre, in memorial of the fallen commanders in 2018, “the ground commander and hero of the Deir al-Zur airport,” Haj Abu Mustafa Haidar, gave an opening speech. Similarly, in 2015, Sports Recruitment organized a sports day on the shore of Tyre, with scenes from the event showing Hezbollah fighters who did not bother to conceal their identity (but rather, as the pictures indicate, seemed to even emphasize it).

It is important to note that apart from classical indoctrination, Hezbollah does use events to convey positive messages such as fair behavior in sports, combating smoking and random shootings, kindhearted treating those with special needs, etc.

The most prominent of Hezbollah’s sports organizations is the Al-Ahed Football Club, which includes gyms, martial arts institutes, and a huge sports complex near the airport.

Hezbollah’s use of the human shield tactic is so cynical that underneath the football club’s home stadium, Hezbollah has established a site linked to the Precision Missile Project for medium-range Fatah 110 missiles. The site was unveiled by former Israeli Prime Minister Netanyahu at the UN General Assembly in September 2018.