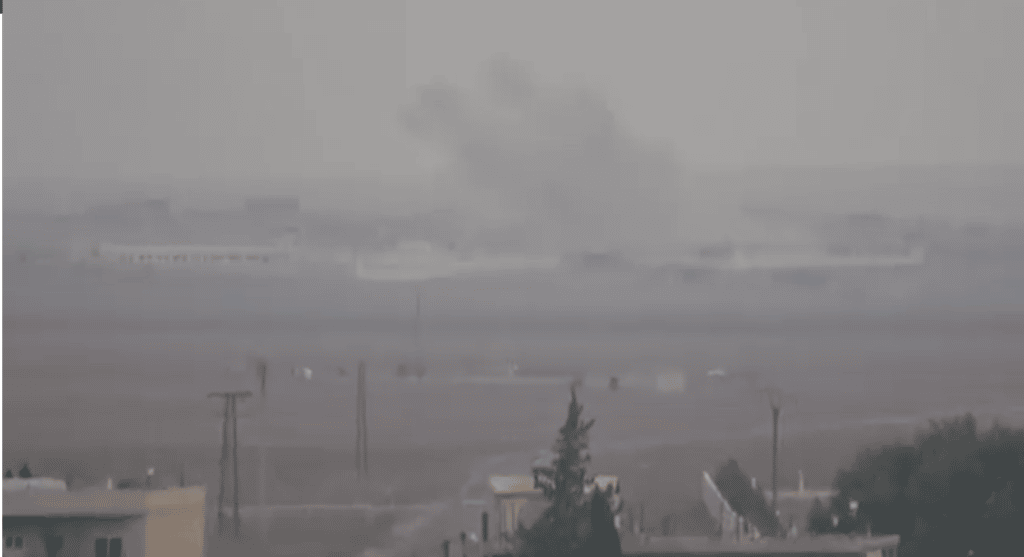 On November 13, 2022, an IED exploded in Istanbul, killing six people. The Turkish government accused the Kurdish underground of sending a Syrian refugee from Afrin to place the IED. As a result (or as an excuse?) Turkey launched a military operation against the Kurdish forces in northern Iraq and northern Syria, putting the emphasis on the PKK and the Syrian Democratic Forces (SDF).

In Syria, Turkish activity is carried out both east and west of the Euphrates River[1]. But while in the areas east of the river, the presence of the Assad regime’s military forces is depleted to non-existent as one moves eastward, looking west of the Euphrates River, with an emphasis on the areas north of the city of Aleppo, there is a high presence of Assad’s army forces (which have long since recaptured the Aleppo area) as well as Russian forces.

As of this writing, Turkish activity is characterized by extensive artillery shelling using cannons, rocket launchers, and airstrikes by fighter planes and UAVs. So far, there have been no reports of significant Turkish ground operations beyond the territories already under their control and presence in northern Syria.

In the area of Aleppo and in the Idlib area, dozens of Syrian Army fatalities were reported this past week in several locations due to Turkish shelling. These include the northern neighborhoods of Aleppo, the towns of Shata’ar and Tel Rifat between Aleppo and the Turkish border, and the Idlib area.[2]

East of the Euphrates River, Kobani, located directly on the Syrian/Turkish border, was devastated by Turkish artillery, and there are reports of fatalities – both among the Kurdish fighting forces and civilians. The regional SDF announced that, at this stage, it was ceasing its participation in the struggle against ISIS alongside the American forces due to the Turkish offensive and the need to deal with it.

Turkish UAV attacks in the area also damaged electricity-generating installations and oil facilities.[3] Attacks also took place in Qamishli (where there is also a Russian presence).[4] These oil facilities are used by the Kurdish forces (SDF), and US forces are present there and are partners in securing them. Turkish UAVs reportedly attacked a Kurdish base adjacent to the US base not far from Hasakah, 45 km into Syrian territory.[5]

Syrian sources close to the regime claim that there is coordination between the US and Turkey as two NATO members. The US was warned in advance of the Turkish attack on the Kurdish base, which is about half a kilometer from the US base.

The Turks demand that the forces of the Syrian regime take responsibility and take over the rural area north of Aleppo, including the return of Syrian civilian institutions. The Turkish ultimatum states that if the Syrian regime forces do not do so, the Turkish army will move south and take over Tel Rifat itself. Turkish sources report that the Russians are making efforts for the Syrians to take control to prevent a Turkish land move.[6]

According to SDF officials, the Turks are also demanding the extradition of ten of the PKK leaders who are in Syria, the withdrawal of all PKK operatives from Syrian territory, the withdrawal of SDF forces to a distance of 30 kilometers from the border and the entry of Syrian army forces in their place, and the transfer of part of the oil production in SDF territories to the supported groups by Turkey (possibly referring to the rebel forces supported by Turkey in the Idlib region).

The US administration issued a formal statement expressing concern over the Turkish escalation, which also endangers its forces. The Turks, for their part, made sure to publish photographs of their UAVs documenting a huge convoy shared by the US Army and the Kurdish organizations carrying oil from wells in Syrian territory towards northern Iraq.[7] This is the (alleged) activity that provokes great anger in Syria. Syria complains about the US’s theft of its natural resources while the US imposes sanctions on Syria.

The US’s ability to influence the Turkish government is limited at this stage. This may be due to the American desire for Turkey, a NATO member, to ratify Finland and Sweden’s acceptance into the NATO alliance.

Will the deliverance come from Russia? Alexander Lavrentiev, President Putin’s envoy to Syria, announced that he was working on a direct summit meeting between Erdogan and Assad. A meeting that will halt the hostilities and prevent a Turkish land invasion in the near future.[8]