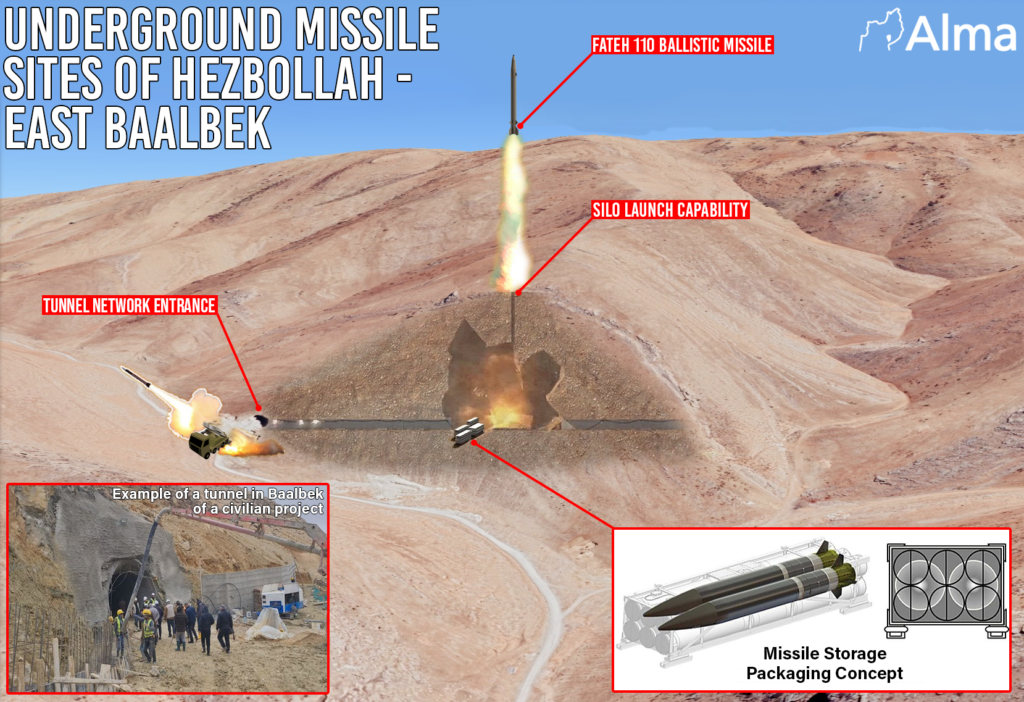 In the context of the shortage of running water in the Beqaa Valley area in general and in Baalbek in particular, a project is currently being carried out with funding from the German Development Bank and in cooperation with the UN to pump water from the “Qachqouch” and “Dardara” springs in the mountainous area near Baalbek. The project will function using gravitation without needing electricity or generators (the project is carried out at an altitude of 1700 meters above sea level). The project is performed with Hezbollah’s public support, including its senior officials’ visits to the construction site.

The project is being carried out by the “al-Moustafa Commercial and Contracting Company “. As part of the project, a horizontal tunnel was dug in each of the springs. In the “Qachqouch” spring, the tunnel is at a length of 100 meters, and in the “Dardara” spring, the tunnel reaches 50 meters.

The above civilian project sheds a very interesting light on the capabilities of al-Moustafa Commercial and Contracting Company regarding the excavation of tunnels and underground shafts. The company’s directors are Shi’ite supporters of Hezbollah, and it operates mainly in the Beqaa Valley and south Lebanon.

The Beqaa Valley, in general, and particularly the Baalbek region, serve as Hezbollah’s logistical and operational rear base. This region is home to Hezbollah’s general ammunition and logistics depots, long- and medium-range missile storage and launching sites, and it is believed that in this area, Hezbollah is trying to carry out part of the precision missile project.

According to our information, Hezbollah has about 5,000 long- and medium-range missiles. It is estimated that Hezbollah currently has a few dozen Fateh-110/600 medium-range precision missiles (up to 350 km) capable of striking within a few meters of a designated target.

Part of Hezbollah’s long- and medium-range missile arsenal is stored in shafts and underground tunnels (similar to the pictures above of the water springs project).  There is a high probability that Part of the missile arsenal is mounted on trucks/launching platforms in the eastern mountain Area of Baalbek. These missiles are primed for immediate launching from launch sites in this area in the next war.

There are two options for launching these missiles: first, they may be launched from within the shafts/tunnels themselves so that the missiles emerge from a designated built launch canal. The opening of the launch canal exiting the mountainside is camouflaged. The second launching possibility is that some of the laden missile trucks can be driven out of the tunnels, launching their missiles quickly, subsequently returning to the “safe zone” inside the mountain to reload a new missile, and so on:

Hezbollah has built a “land of tunnels” in Lebanon (see our special report on the subject). Hezbollah’s “land of tunnels” comprises several types of tunnels. This is not just a local tunnel network of attack tunnels and infrastructure tunnels in or near the villages, but a network of inter-regional tunnels of dozens of kilometers that extend and link the area of Beirut (central headquarters) and the Beqaa Valley (a rear operational logistics center) with the area of south Lebanon (which is divided into two deployment zones Hezbollah calls “defensive lines”). In addition, they link the deployment zones inside south Lebanon (between Hezbollah’s first “line of defense” from the Israeli border up to the Litani River and Hezbollah’s second “line of defense” from the Litani River north).

As mentioned above, Hezbollah’s “land of tunnels,” which also includes shafts for storing and launching missiles, in eastern Baalbek, for example, was built with the assistance of the North Koreans and the Iranians. Hezbollah’s Construction Jihad Association (a branch of Iranian Jihad Construction established in 1988) was responsible for the construction.

We acknowledge several companies we suspect are involved in building Hezbollah’s military infrastructure in general and building the “land of tunnels” in particular. In the past, we dealt with the “MEAMER Engineering and Development,” “Arch Engineering Consulting and Research” (both under US sanctions), and the “Bekaa Construction and Contracting Company,” formerly known as the “Iranian Authority for Building Lebanon,” which was established in 2005 under the auspices of the Revolutionary Guards.  And finally the “ Caesars construction ” company of the drug lord Hassan Muhammad Daqou, which is involved in engineering works, the purpose of which is apparently the construction of “protected underground concrete structures” on lands allegedly purchased by Hassan Daqou (In the photo)  in the area of A-Tafil, southeast of  Baalbek near the border with Syria.

Above the surface, these civil societies operate based on their specialization in a legitimate civil sphere. They are bound by the state with tenders and formal contracts and carry out work according to the substance of the contract. International bodies such as the UN or the German Bank (as mentioned above in the context of the water springs project) contract these companies to carry out assignments that undoubtedly contribute to Lebanon’s infrastructure and quality of life.

However, these civilian companies are affiliated with Hezbollah and are also engaged in building Hezbollah’s military infrastructures based on their expertise. Their civilian activity provides them and Hezbollah with optimal cover.

It is important to note that these companies are awarded tenders and civil contracts because they are affiliated with Hezbollah. Some tenders are “prearranged” or “manipulated” by senior figures in the Lebanese government collaborating with Hezbollah.

What do we know about the al-Moustafa construction company?

In the same area where the company is incorporated, we identified a company called “Ali Melhem Mukahal Establishment,” which has existed since 1985. It is unclear whether this is the same company, its parent company, or whether it is another entity with the same name.

The Company’s Activities and Relations with the UN

In November 2021, about a year ago, the company announced that it had begun implementing a project to install a water receptacle with a volume of about 1,000 cubic meters in the Baalbek area, funded by the United Nations UNICEF. This is not the first time “al-Moustafa Construction Company” has implemented water infrastructure projects in Baalbek.

In August 2019, the company cooperated with organizations affiliated with the UN. In August 2019, the Union of East Zahle Councils held a working meeting with the company’s representatives (including one of the management members, Muhammed Ahmed Abu Diyeh) and representatives from the United Nations Development Program (UNDP) – the UN’s international development agency.

The Company’s affiliation with Hezbollah

The regions where the company operates have a Shiite majority and are recognized as an environment that supports Hezbollah for the most part. This is nothing new. However, our research found direct links between CEO Ali Melhem Al-Mukhal and Hezbollah operatives.