The Opening of the Negotiations Over the Maritime Border between Israel and Lebanon – is this really a win-win situation? 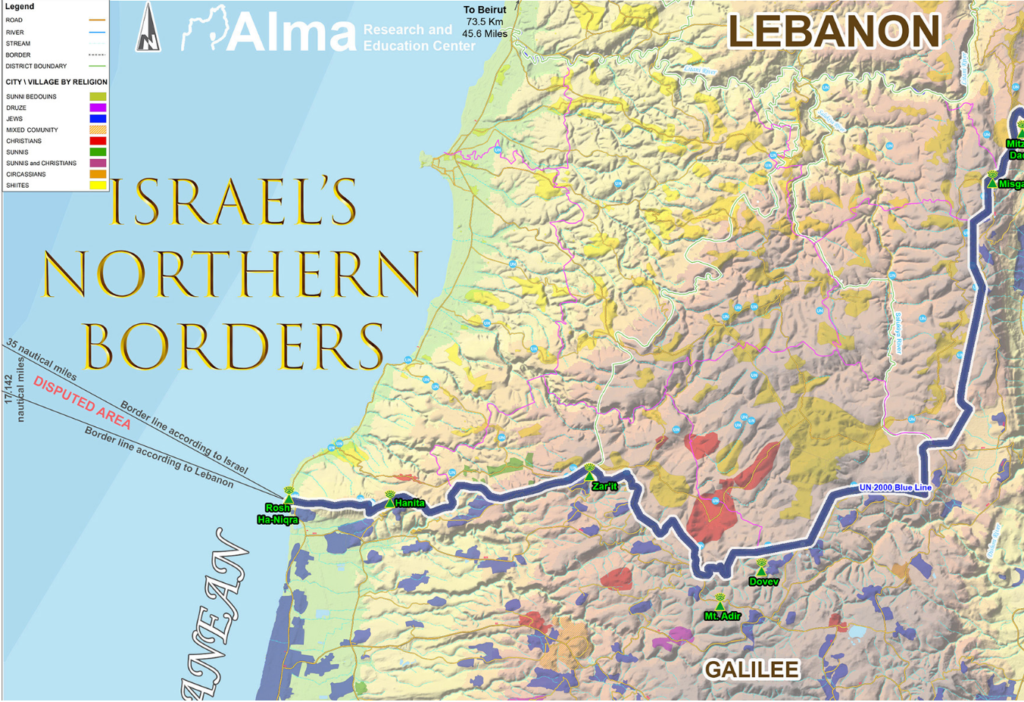 As a result of the opening of the negotiations between Israel and Lebanon to settle the Maritime Border dispute, there have been many speculations as to whether this is the start of a process of normalization between the two countries. First, it is important to note that Hezbollah’s leadership itself clarified, via its faction in the Lebanese Parliament, that Lebanon’s negotiations with Israel are solely on a specific matter regarding the maritime border. No connection whatsoever to the reconciliation with the enemy exploiting Palestine, nor to the normalization policy that has been carried out lately by the Arab nations that have never believed in the option of Resistance.”
Something significant befell Lebanon in the past year – Hezbollah, after years or establishing its control in the governmental organizations, finally succeeded in taking control of the Lebanese government. Even French President Emmanuel Macron’s attempts to establish a technocratic government and take the treasury office out of the hands of the Hezbollah-Amal Shiite duo have met a dead end, and thus far Lebanon has no government.

So, with whom will Israel be negotiating the Maritime Border?
Michel Aoun, President of Lebanon, who 14 years ago completely changed his attitude towards Hezbollah and ever since has been Hezbollah’s right hand, took the conduct of the negotiations upon himself, as the LAF’s highest-ranking commander. Hezbollah’s mouthpieces in Lebanon made sure to emphasize over the days preceding the negotiations, that political attribute must not be given to the Lebanese or Israeli representative level, in order to dash any hopes presenting the negotiations as the first step to normalization between Israel and Lebanon.

What is the debate about?
There are several unresolved issues between Israel and Lebanon regarding the border. While according to Israel, it has withdrawn from Lebanese territory down to the last foot and has no interest in controlling Lebanese territory, for years the Lebanese government has not accepted the UN’s announcement in 2000 that Israel had withdrawn to the Blue Line, thus preserving (in Hezbollah’s interests) a number of disputes:

Sources involved over the years in negotiations with the Lebanese clarify that Israel is willing to sign a peace agreement at any given moment. The Lebanese are the ones making it difficult and are time and again creating disputes along the border. These disputes could have been resolved easily, as they are tactical disputes, but alas, Hezbollah controls Lebanon and it insists on finding reasons for preserving its dispute with Israel. Thus, Hezbollah created another dispute and named it “the seven villages dispute”. These villages are located deep within Israeli territory and were included in it when the Blue Line was marked in 1921 by the two generals. Hezbollah, led by Nasrallah, is promoting the narrative that Israel needs to return the residents of the 7 Shiite villages that disappeared later on in Israel’s Independence War in 1948 and fled to Lebanon.

Until 2019, attempts were made by the Americans to resolve all the disputes on the border between the two countries, both land and sea, simultaneously, a “packaged deal” of sorts. However, Hezbollah foiled all negotiations on this matter. Lately, as mentioned above, Hezbollah agreed to the negotiations on the maritime border only, and we can assume that both sides will mark the border in a way that each of them will be able to say that it achieved its goals in the negotiations. If this will be so, this is obviously a win-win situation. Naturally, each side will be economically rewarded in the future by the agreement, as the use of the gas reserves believed to be located in the maritime border area, will come to fruition.
However, it is extremely important to take note of the loss – Israel might be missing out on the opportune chance to pressure Lebanon into putting an end to the land border disputes as well, or at least some of them.

Even more importantly – who will receive the money that will be coming to Lebanon as part of the agreement? Whether it will be with loans authorized by the IMF after receiving an economic prospect by Lebanon or later with the realization of the gas transactions. ultimately, the money will end up in the hands of Hezbollah, who until now have been depleting Lebanon’s budget and will be the one to benefit from any unsupervised aid that will be given to Lebanon in the future.

While on one hand, sanctions are being placed on Hezbollah, on the other hand, an agreement that will bring the terrorist organization a lot of money will be signed. The Lebanese people will not benefit neither from the economic prosperity nor from the agreement’s returns.

The agreement’s supporters bring another claim – the agreement will place restraints on Hezbollah. A gas rig for Lebanon will add another important layer to the balance of deterrence between the two countries because Hezbollah will now have something to lose. However, even now when there is already a balance of deterrence between the two sides and Nasrallah’s actions and terror attacks against Israel over the past 14 years were very few and calculated.

If so, in order to ensure the cost will not exceed the benefit, it must be ensured that Hezbollah’s status in the Lebanese government will be weakened soon, and in the current situation – it is not at all certain that this will be so.