The New Middle East – Looking Forward to 2021 Risks and Opportunities 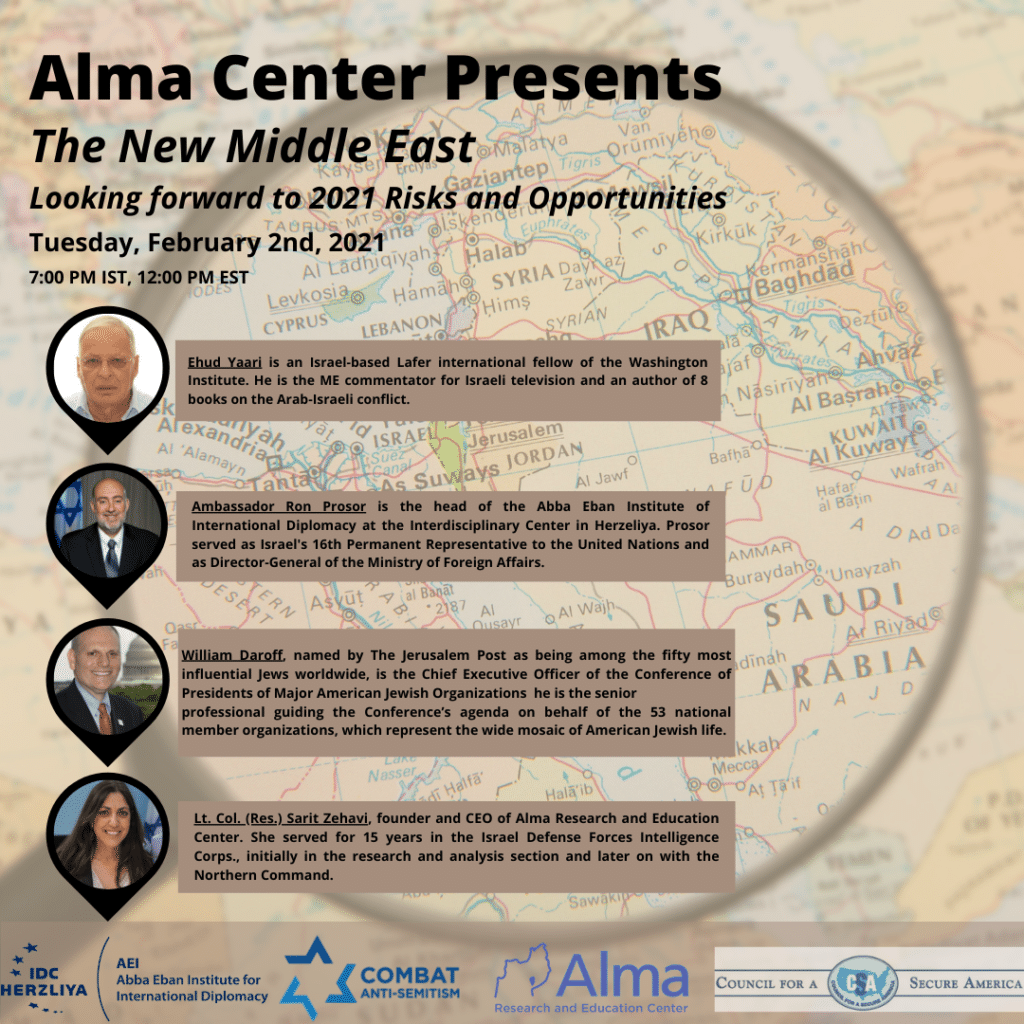 2021 brings both risk and opportunities. On the one hand, the Abraham Accords bring in hope for a new era of peace and prosperity between Israel and the Arab world, something that seemed far fetch only a year ago. Now all of the sudden we have normalization agreements with the UAE, Bahrain, Sudan, and Morocco.

On the other hand, Iran is more determined than ever to expand its Shiite Axis in the Middle East, most notably the creation of a new front against Israel from the Syrian Southwest. In his latest speech, the IDF Chief of the General Staff LTG Aviv Kohavi spoke about the challenges Israel & IDF are facing. Iran and the JCPOA, Hezbollah, and the threats against Israeli citizens. In the next war, the citizens of Israel will be vulnerable, and there will be no escaping major casualties.

In order to address this hectic Middle East, Alma’s webinar brings in an extraordinary panel of experts, who will tackle the most difficult questions raised concerning the year ahead. The panel will include:

Ehud Yaari: He is one of Israel’s most prominent journalists. Yaari is the commentator in Israel’s Channel 12 news on Middle Eastern affairs and is the author of 8 books on the Arab-Israeli conflict. He also serves as an international fellow of the Washington Institute.

Ambassador Ron Prosor: Ambassador Prosor is the head of the Abba Eban Institute of International Diplomacy at the Interdisciplinary Center in Herzliya (IDC). He also served as Israel’s 16th permanent Representative to the United Nations and as Director-General of the Ministry of Foreign Affairs.

William Daroff: Was named by The Jerusalem Post as being among the fifty most influential Jews worldwide. He serves as the Chief Executive Officer of the Conference of Presidents of Major American Jewish Organizations. He is the senior professional guiding the Conference agenda on behalf of the 53 national member organizations, which represent the wide mosaic of American Jewish Life.

These unique panelists will each bring a different angle and perspective concerning both the opportunities and the risks that lie ahead in 2021 in the Middle East.