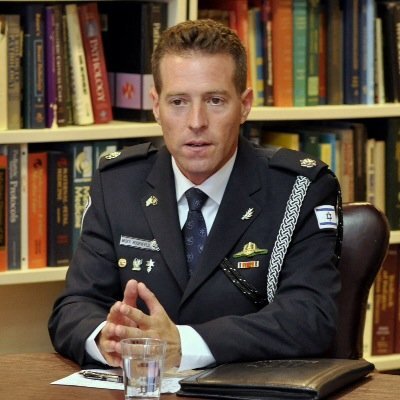 Although ten days have passed since the escalation began, it was very important for us to understand what ignited the flames? What exactly happened there between the police and the Arabs in Sheikh Jarrah and the mosques in the Temple Mount compound? To that end, we interviewed the police spokesman – a voice that is barely heard. Here are the things he told us.

In the beginning Mike Rosenfeld, the police foreign press spokesman explained “During the first two weeks of Ramadan, it was quiet. However, on the last two Fridays (May 6, April 29), there were incidents in the Jerusalem area where police officers were attacked and had to respond. In the Sheikh Jarrah area, police responded to Arab civilians who attacked Jews.

These two places on the Temple Mount and in Sheikh Jarrah alongside the timing of the end of Ramadan – all this led to riots inside Jerusalem and an attack on the police force at the Damascus Gate. Tensions were rising and there were more and more riots and cases of violence”. According to Rosenfeld, the police deployed more police officers in Jerusalem and made arrests to try to stabilize the situation.

This year Friday, May 10, was Jerusalem Day which coincides with the Muslim Ramadan fast. Jerusalem Day is celebrated every year by tens of thousands of Jews. It marks the unification of the city by the IDF in 1967. Between 1949 and 1967, Jerusalem was a divided city. While the eastern part, including the Old City, was under Jordanian control and the western part was under Israeli control. This is according to the ceasefire agreements between Israel and Jordan at the end of Israel’s war of independence.

It is important to note that since 1967 there has been a status quo agreement between Israel and the Muslim Waqf by which the control of the Temple Mount is in the hands of the Waqf and the Jordanian government and that Jews are not allowed to pray on the Temple Mount. Over the years since then, there have been many cases in which entry into the compound has been completely banned for Jews due to threats on jews’ lives.

Regarding the sanctity of the place: The Temple Mount complex currently has 3 mosques: Al-Aqsa with the silver dome, the Dome of the Rock with the golden dome that was not originally built as a mosque, and the largest of them – Salomon’s Stables, an underground mosque established in 1996, violating status quo agreements.

According to Muslim tradition, Muhammad ascended to heaven and met with the prophets who preceded him where the Dome of the Rock is today. Jerusalem is defined as the third holiest city for Islam after Mecca and Medina in Saudi Arabia.

According to Jewish tradition, the stone under the dome of the rock is the Foundation Stone – from which God created the universe. In addition, according to the tradition of the place, there was also the binding of Isaac. And above all, named Temple Mount after both temples that were built there. Jerusalem is the holiest city for Jews. The Western Wall located below the Temple Mount complex is considered the last remnant of the wall that surrounded the Temple and is, therefore, the holiest praying place for Jews today.

Another decision of the police was to prevent the thousands of participants in the flag parade in honor of Jerusalem Day, which always passed through the Damascus gate, from passing there, as it was a very narrow entrance into the Old City and it was dangerous. Rosenfeld stressed that the purpose of these police decisions was to calm the situation.

As for the entrance of the Israeli police to the mosques on Jerusalem Day – Rosenfeld wanted to clarify that the Israel Police by definition does not enter holy places, only if there are riots and if necessary. “In principle, the police are very careful not to enter sensitive areas where there are worshipers, especially women. The mosques are a spiritual and religious place and the police have no desire to enter there.”

Rosenfeld added that “the violence had started by the local Arabs inside the Temple Mount compound, in a way that endangered the worshipers at the Western Wall below the Temple Mount compound and the policemen at the entrance gate that passes above the Western Wall. “Most of the rioters deliberately entered the mosque and hid there among the worshipers so to arrest them, the policemen went inside. It was an operational decision. While the policemen used non-lethal weapons.”
This was not the first case in which Arab citizens of Israel attacked the police at the Mughrabi Gate and tried to throw stones at anyone who was at the Western Wall. There have been such cases in the past.

At 6:00 pm that day, Hamas fired rockets at Jerusalem with thousands of people on the streets. Two rockets landed near Mevaseret Zion – 5-8 km from Jerusalem. Rosenfeld asked: “What would have happened if there had been a rocket near the Old City where everyone was celebrating? We would have been in a completely different situation now.”

Rosenfeld referred to the type of rockets fired by Hamas during the latest round of violence. About 4,000 rockets were fired at Israel, of various types for longer ranges than before. According to him, the explosiveness of the rockets is much larger than we are used to. For comparison, the explosives used in the terrorist attacks on buses during the Second Intifada contained about 10 kg of explosives, while Hamas Rocket explosives weighed 30 kg. Therefore, there is much more damage in Israel.

The day after Jerusalem Day, extremely violent riots broke out across the country – Arab Israeli citizens took to the streets, both in the Arab villages in the Galilee and the mixed cities – Acre and Lod and also in the south in the Bedouin tribes and on the main roads. Rosenfeld explained that “the rioters intended to attack police officers and kill Israelis wherever possible. He cited Lod as an example, where Arabs and Jews live house by house. Door to door. Women and children were attacked. They entered their homes. Arabs also opened fire on the police. There were Jews who were shot. Treated in critical condition. There is an injured policeman in moderate condition and so far even though the police have deployed hundreds of policemen and there is a full curfew in the city, every evening there is very high tension”.

Rosenfeld said that as of the time of the interview (May 14) the police had made 750 arrests. Less than 100 of them are Jews who attacked Arabs. He clarified: “there were also cases where Jews attacked Arabs”. He added that the police use social media to locate the rioters around the country and arrest them – Jews and Arabs.

In conclusion, Rosenfeld said that there is still a lot of tension in the streets but “the police is scattered everywhere to prevent incidents of violence”. He stressed the importance of dialogue with local leadership, mayors, and tribes’ Sheiks and added that police have asked them to calm down and ask residents to stay home and avoid violence.

Finally, during the Muslim holiday, Eid al-Fitr, which took place on May 12-13 it was quiet on the Temple Mount. Rosenfeld wanted to stress that the police “are in control of the situation. You will see that people were not killed. If the police were not deployed in all areas I do not want to think what would have happened on the streets.”